Meeting with Thames Water in Bramley

The purpose of the meeting was to meet first-hand the personnel in Thames Water who are now dealing with the sewage problem in Bramley and who will be assessing the results of the modelling that has been undertaken by Thames Water concerning Bramley, and also for Bramley Parish Councillors to show first-hand the problems that Bramley is facing concerning the sewage overspill.

The walk around Bramley took us to:

Discussion took place at this point with the Officers and photos exchanged of the problems. These are attached along with a video of the water gurgling up in the sink at 2 Water Meadow Close. James supplied a copy of the layout of the pumping station on Sherfield Road.

Discussion: – James Hern is the Officer in charge of the evaluation of model that has been undertaken by Thames Water.

Our understanding from the discussion is that

In this area clarification from Thames water would be appreciated as regards the options.

The visit ended at this point. We believe that as a result of the meeting, Thames Water appreciate the problems and misery that the residents of Bramley are suffering as a result of sewage overspill, and that the modelling of Bramley and the results confirm that the present sewage infrastructure is not adequate to cope with the present housing let alone more housing.

We explained to the officers that for every housing application that has been approved in recent years, whilst Thames Consultants have admitted that there could be a problem with sewage overspill there has never been any upgrade in the infrastructure to alleviate this likely problem, resulting in the misery that residents now suffer. It was agreed that the Consultant Officers in Rickmansworth look at the individual application and make their response on an individual basis and do not take into account the overall impact of all applications. No referral is made to the officers such as James who are modelling Bramley as a whole and have found the present inadequacy of the infrastructure.

Correspondence and liaison with Thames Water will continue from this point on, information being supplied by Bramley Parish Council as and when problems arise, and from Thames Water, information concerning the options available for finding a satisfactory solution to the problem which we are assured will be conveyed to Basingstoke and Deane Borough Council Planning department and has to be taken into account in considering further housing development in Bramley.

The bottom line is that the present sewage infrastructure in Bramley, tied in with surface water drainage, is incapable of coping with the present housing in Bramley and without considerable upgrade cannot cope with more housing.

Bramley Parish Council would like to thank the Officers of Thames Water for their time spent with councillors, hearing Bramley’s end of the story, and for the information Thames Water Officers supplied. We trust that this is a reasonable summary of the meeting and we would appreciate any corrections as regards the solutions listed.

The Link to the Video of the water back flowing at Centenary Fields, No 2 Meadow Close, below.

Figure 1: – Manhole in Centenary Field near the Pumping Station overflowing in October 2020 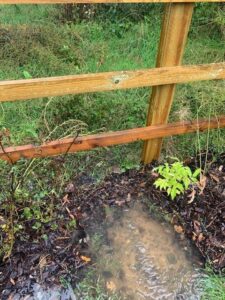 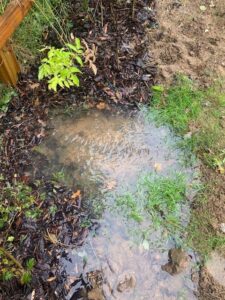 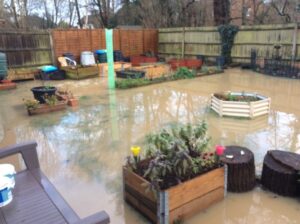 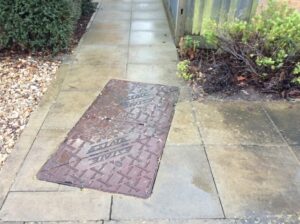 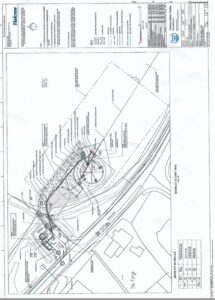